While doing genealogy research on Matthew Kellum (listed as Mathis Callum on 1880 census), my grandmother Hattie L. Kellum Green’s father, I found his grandparent.  I have no remembrance of anyone talking about them at all but here they are on the 1870 census.

See my post about discovering my Kellum Family for more details about this discovery.

First lets make a note of the following from this census:

Next checking around the ancestors on the 1870 census to see if there were any European or others listed with the same surname.  This may lead to the find of the slave owners or additional family. members.

Check other census for more info:

It appears that I have a birth place Claiborne which is in Monroe County. This is the place where I also found Esaw Kellum the possible slave owner of Matthew or his mother and/or father.

In checking the 1850 and 1860 census for Monroe County AL I did not locate Wiley/Wylie. There are Wylie/Wiley estate papers listed in FamilySearch.org  for other counties in Alabama.  I went through all of the documents issued before 1865.  I continued to search for Wiley/Wylie’s in counties closest to Monroe County and I located John Wiley living in Dallas County that died 1832, Evan S Wiley died 1825,  Mary Polly McCalb Wiley died 1840 through Family Trees listed on Ancestry.Com. But no one had  any estate documents and there were none listed in FamilySearch.org for these name.

I was able to locate an e-mail address for Dallas County Probate on line which I inquired as to if they did online research and they do.  I am re-sending my info to the correct e-mail address and I will keep you posted on my findings.

One night during the holidays I watched one of my favorite movies, Roots: The Gift. The movie stars LeVar Burton and Louis Gossett, Jr., in their roles as Kunta Kinte and Fiddler from the television series Roots. In this movie, Kunta and Fiddler accompany their owner to another plantation at Christmas time for a party, and become involved in a plan to help some runaway slaves escape via the Underground Railroad to freedom. A simple, yet powerful story. There are many messages and lessons to be learned from Roots: The Gift.

In one of my favorite scenes, Fiddler and Kunta are helping the group of runaway slaves get to the river where they are to meet a boat that will take them further on their journey to freedom. Along the way they make a stop to pick up other “passengers” on the Underground Railroad. When they come to…

I had been researching my mother mother’s family and just documenting my know paternal family off and on for over 15 years when my father ask me to please find out what war his grandfather Emp fought in.  It was rumored in the Africa Town community that he was a Buffalo Solider.

Now here I am an adult and in my mid-forties and I had never heard of this.

I have never seen a picture of Emp, I have never heard any stories about him and all of the elders are deceased.

My father the baby who knew nothing about his ancestors has given me this assignment.  Where do I start?  I visited the Mobile Genealogy Library and I had found Empot (misspelled his name is Emperor Green)  Green and his family listed on the 1900 census  in Whistler, Mobile County, AL. His birth year listed was about 1850 and has been married for about 18 years to Mary Etta Telfly/Telfar Green.  She had been pregnant nine times but has only five children living. Emp can not read or write, is a day laborer and he owns his house free of mortgage.

Africa Town was not considered part of Mobile City so there was no information about there inhabitants other than the census.  In the early years the men worked outside the house for about 1.00 per week mostly in the lumber yards.  They would fish and hunt to supply food for the families.  The women stayed home with the children.  They grew vegetables,  fruit and sold them in open markets in the community.  The first and second generations of the African descendants spoke English and their parents native African language.  They established a school in the community for their children and brought in a teacher, there was a chief leading the community, a medicine man and a large number of them attended Stone Street Baptist Church  until started Union Baptist Church. ( http://en.wikipedia.org/wiki/Stone_Street_Baptist_Church )

I continued my search for Emp.  Not finding anything else I ask my father if he was sure that Emp was the Buffalo Solider that they were talking about that is buried in the Plateau Cemetery?  He  said ” well I know he was in the service because my great aunt was getting his pension”.  So I began to search for military pensions.

Several years later I found his file index in Ancestry.com. It was  spelled E- r- n- p Green.  Great grandmother Mary Etta’s name was listed as well as my great Aunt Clementine (unable to find a copy of the original applications).  It proved to be his pension record.  Service information was listed  A 86 USC Inf (Civil War US Colored Troops).   I was so excited to finally have this information however it was months to late to share with my father he died June 2000. 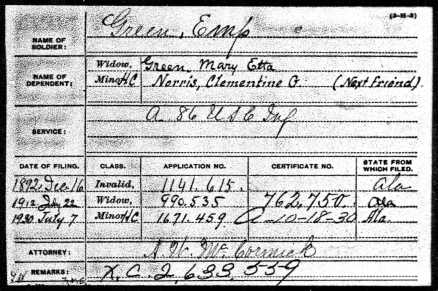 I received a copy of his records from the National Archives. There was no record or information of his mother, father, no next of kin or slave owner.  There was some valuable information listed such as  he  was  born in Baldwin County AL, he was 17 years old at the time of this application and  his occupation was a Laborer. 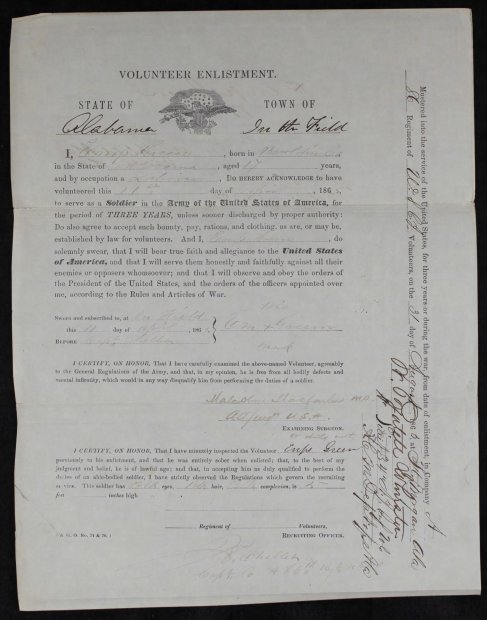 He volunteer or mustered in on the 11th day of April 1865 for three years at Fort Morgan (Gulf Shores, Baldwin County, AL.).

And there is a description of him which is so important to me since we have no pictures.  Black eyes, black hair, and black completion and was about 5 feet tall.

He served in the field for one year.  After doing more research on his unit I discovered that his job was to make sure that  everyone and mostly the slaves knew that the war was over through out the state of Alabama.

His military career was cut short  after a year he was mustered out in Mobile City, Mobile County, Al.  Not understanding why I did additional reading through several historical writing about USCT during that time.  I learned that the European’s who lived in the area were very unconformable with ex-slaves baring arms.  So they were all dismissed early.

Emp’s name  is listed on the wall as part of  African American Civil War Memorial , Plaque number C-91 which we have a picture of. 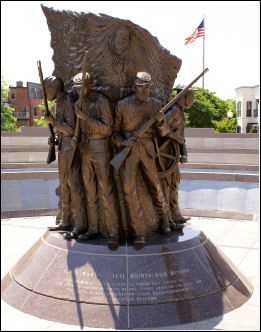 Three member of Alabama’s Chapter 1 of the National Association of Buffalo Soldiers also participated in the event. These soldiers honored Emperor Green, a Buffalo Soldier buried at the cemetery.

I began my life in a small community right outside of the city of Mobile AL in Mobile County called Plateau.  My grandparents (father’s parents) lived in an adjoined community called Magazine Point.  Magazine Point is where the Africans lived that came off of the last slave ship that came to the U.S. (the “Clotilda”).  So I grew up thinking that my father’s families came off  the Clotilda and were never slaves.  Another reason I thought that they were never slaves was because no one ever talked about slavery.   My grandmother would tell us things about her parents and her brother who were all deceased but nothing about slavery.  In this small community we had cousins living all around us or with in a short walking distance.  How were they cousins?  Once I began my research on these family lines the puzzle pieces began coming together.  I quickly discovered that all of my great grandparents on my father’s side were slaves. They had not come off of the Coltilta and even the Africans who had arrived on that ship were enslaved from 1860 – 1865.   Once the Africans were free they purchased the land that is now known as Africa Town from the person who had commissioned their captivity and enslavement (Timothy Meaher) to create their community.   http://www.encyclopediaofalabama.org/face/Article.jsp?id=h-1402

So how did my family get to live in the middle of the Africans?   My great grandfather Emp Green married Mary Etta Telfly who is the sister of William Ellis (unknown at this time why his surname is different).  William Ellis married Julia Allen who is the first born American daughter of Polee and Rose Allen who arrived from Africa on the Clotilda.

This map taken from “Dreams of Africa in Alabama” shows the land plots of the African Town community in 1920 which includes my direct family the “Green’s”.

My cousins married in the African families of Peter Lee and O. Keeby. The female pictured above is my great grandmother Mary Etta Telfly/Telfar Green and the picture listed below is her brother (my great uncle) William Ellis and his wife Julia Allen Ellis (daughter of Polee and Rose Allen from the  Clotilda.

I will share more information about my great grandparents who lived in Africa Town in my next few post.  So please stay tuned …